Bridging I-95: Reconnecting the Community
I-95 Cap Feasibility Study

WILMAPCO is leading the effort to study the feasibility of capping one or more sections of I-95 between the Delaware Avenue bridge and the 6th Street bridge. Highway caps create the opportunity for new public spaces and walking/biking connections on top of highways. There are four streets that bridge over I-95 in this corridor, including 7th, 8th, 9th and 10th Streets. The five areas between the bridges create an opportunity for multiple concepts to be developed utilizing some, or all, of these spaces to create new connections between neighborhoods divided by the highway and new public spaces for the community to enjoy. 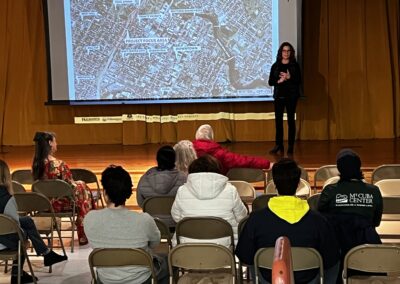 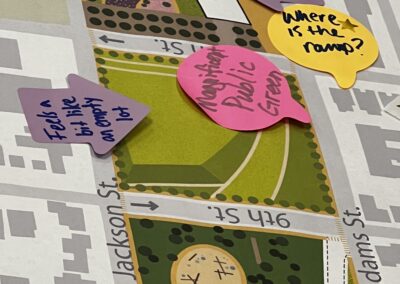 The Advisory Committee consists of neighborhood/civic organizations, community and advocacy groups, churches, local, state and federal agencies; and city, state and US elected officials. This committee serves as an important connection to the community and area leaders, and is an important part of the decision-making process. To view the complete list of Advisory Committee members, please click below. If you have ideas for organizations or individuals who should be added to the Committee, please email Dgula@wilmapco.org.

This study will result in a concept(s) for a cap over I-95, including potential uses such as new public spaces or transportation facilities, as well as a cap structure that can support the preferred uses. The concept(s) will have been vetted with the community and stakeholders through an intensive public outreach process. The final report will detail all aspects of the study, including bicycle, pedestrian and transit access to the new space from the adjacent neighborhoods. The report will also include the Planning and Environmental Linkages (PEL) documentation needed for the project to be eligible for local, state, and federal funding.

The construction of I-95 through Wilmington resulted in the destruction of hundreds of homes between Adams and Jackson Streets. The ramps to downtown were constructed as a compromise to bring economic development to the downtown and Riverfront, and to offset the loss of the neighborhood. Construction of I-95 effectively created a wall between the West Side and the downtown area separating these neighborhoods. This also substantially increased traffic on parts of Adams and Jackson Streets, which now serve as busy service roads for the I-95 ramps instead of quiet neighborhood streets.

The affected neighborhoods were largely composed of middle class white families (80%) at that time with 23% being foreign born, similar to the City as a whole. Over time, the changes to Wilmington’s overall racial composition were amplified by the construction I-95 through these neighborhoods. Today, the area consists of a population that is 79% African American and minority, with the residents mainly considered as low income families.

To address the division created by I-95, Wilmington is now joining an ever-growing number of cities that are exploring ways to reconnect neighborhoods and provide new public spaces by creating caps over urban highways. These new lands are being used to create green spaces, plazas and cultural amenities that can reconnect neighborhoods and provide opportunities for residents to walk and bike more in their communities.