The North East TOD Plan was developed by WILMAPCO in partnership with the Town of North East, Cecil County, Maryland Department of Planning and the Maryland Department of Transportation with guidance from the North East TOD Advisory Committee. The Plan identifies a potential location for a future train station/transit hub, as well as future land use and transportation to promote future reintroduction of rail service to North East, promote greater use of existing and planned bus transit, enhance community character, improve regional access and local walking, bicycling and transit, support local and state smart growth and economic development, and embrace the community history while preparing for the future. 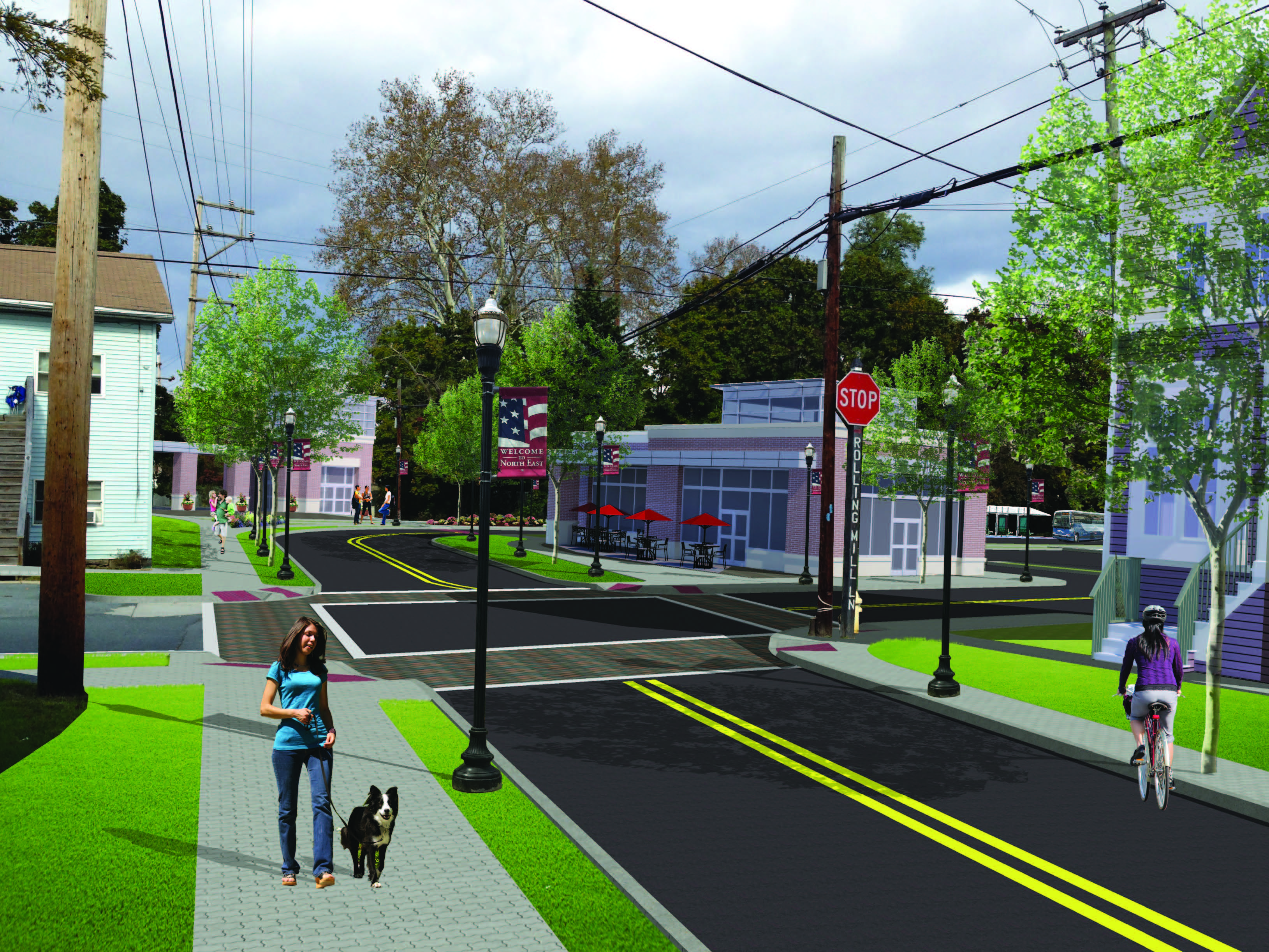 Past Events and Meetings

Transit-oriented development (TOD) is a mixed use residential and commercial area designed to make public transit successful, walking and bicycling convenient and safe, and provide for a vibrant, livable community. Within North East, Maryland there is currently fixed route Cecil County transit and interregional Greyhound bus service which could be supported through TOD. In addition, the WILMAPCO 2040 Regional Transportation Plan and MTA MARC Growth & Investment Plan call for the extension of commuter rail from Perryville to Elkton, MD or Newark, DE. In addition, the Cecil County Transportation Development Plan calls for a future express bus stop in North East with service between Newark and Aberdeen, MD and an extension of bus transit within North East. With the introduction of transit-ready development, North East could promote the feasibility of having a station along this extended rail service. Enhancing use of and access to existing and planned bus transit and promoting TOD around a future station area is a critical component of North East’s plans to further economic development and provide greater travel choices to this rapidly growing area.

Through these activities, the Plan seeks to:

The primary study area was within a 10-20 minute walk of the identified transit hub/future train station site, for which a complete TOD master plan will be developed. A secondary study area will be with a ¼ of existing and planned bus service between Cecil College and the Town, for which appropriate best practices for bus transit oriented development with be identified.

This project seeks to contribute to the revitalization of the traditional and historic community of North East with the improvement of the community’s transit-served areas and potential future train station/transit hub. North East’s compact mix of housing, businesses and institutions offers a unique opportunity to bring together all the characteristics that comprise a Transit-Oriented community. Improved, convenient access by transit, walking and bicycling is essential, as is preparing for vehicular access needs and parking. Implementation of a transit corridor and train station improvement plan will strengthen North East’s identity and focus attention on its function as a transit-oriented community.

Work should result in a concept plan for existing and planned transit corridors and potential train station site. The plan should include all necessary roadway improvements, upgraded pedestrian, bicycle and bus amenities, expanded automobile parking areas and new rail facilities. The plan should address the potential for TOD/Transit-Ready Development along transit corridors and at the identified train station / transit hub site.

The station also has the potential to serve as a transit hub for existing bus transit service. An internal circulation plan should be included that will limit automobile and bus interaction. The bus travel path should be designed to limit exposure to automobile parking areas. Station parking should also be identified. In addition, pedestrian and bicycle access to the station site and bus stops will be identified. In addition, the plan will coordinate with the planning for the Cecil County Bicycle Plan for bicycle route and amenity recommendations.

The plan will include development scenarios for the station area to support the planned train station. The current inventory of infrastructure and land use will be assessed to determine how it supports a TOD development project. Land use recommendations should consider market demand for retail and higher-density housing and employment. Analysis should examine impacts of existing zoning such as lot coverage, setbacks and height limits which may make transit supportive land use difficult to achieve and recommend new land use policy as required. Land use recommendations should promote the location of key services near the planned station to accommodate transit users. Mobility friendly design should be applied near bus stops.

The plan should include recommendations for implementation priorities, potential funding partnerships and project phasing.

Work will include educating the community and seeking participation through community meetings, workshops, project web site, and media coverage.